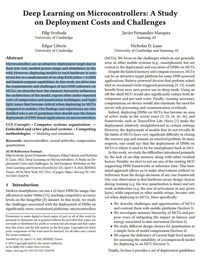 Deep Learning on Microcontrollers: A Study on Deployment Costs and Challenges

Microcontrollers are an attractive deployment target due to their low cost, modest power usage and abundance in the wild. However, deploying models to such hardware is nontrivial due to a small amount of on-chip RAM (often < 512KB) and limited compute capabilities. In this work, we delve into the requirements and challenges of fast DNN inference on MCUs: we describe how the memory hierarchy influences the architecture of the model, expose often under-reported costs of compression and quantization techniques, and highlight issues that become critical when deploying to MCUs compared to mobiles. Our findings and experiences are also distilled into a set of guidelines that should ease the future deployment of DNN-based applications on microcontrollers.

Gain access to all free pdf downloads by logging in. If you don't have an account, registering is quick and free.